The Faculty of Business Administration (FBA) of the University of Macau (UM) recently organised a forum titled ‘Challenges and Opportunities ― Shaping the Future of the Greater Bay Area (GBA) through Academic and Industry Collaboration’ in Guangzhou, one of the four core cities in the GBA. The forum aimed to promote collaborations between Guangzhou and Macao in the areas of featured financial services, tourism, and sustainable development. The platform also hoped to facilitate collaborations between industry and universities, promote the use of research results and knowledge in business, and nurture business professionals with innovative ideas and leadership skills.

Speakers in the forum included senior executives from the business sector and academia in the GBA. Prof Jean Chen, dean of the FBA, gave a speech titled ‘The Role of Business Schools in the Greater Bay Area Development’. She used the FBA as an example to illustrate business schools’ various functions, such as connecting businesses in Macao with those in mainland China; serving as a bridge between mainland China and the rest of the world, in particular Portuguese-speaking countries; facilitating inter-industry collaborations, particularly in tourism, big data, FinTech, and integrated resort-related areas; upgrading local industry and workforce in an era where technology is advancing at an unprecedented rate; and nurturing professionals with leadership skills. She emphasised that FBA’s uniqueness lies in its role to support teaching and learning with real-world practice, impactful research, high graduate employability, and an international outlook through a wide range of business collaborations. She added that FBA’s new executive programme, the Doctor of Business Administration (DBA) programme, is a good example of the faculty’s effort to serve the business sector. She also pointed out that the integration of academic research studies and industry practice will be the future direction of the faculty in the GBA and beyond.

Prof Davis Fong, a member of the Legislative Assembly of Macao and director of UM’s Institute for the Study of Commercial Gaming, gave a talk titled ‘Tourism Industry Collaborations’. During the talk, Prof Fong discussed the recent development of Macao’s tourism industry, with an emphasis on the rapid growth of non-gaming sectors. Through analysing the relevant statistics, he recommended that the GBA should promote the single-trip-multi-destinations travel mode.

Mao Shuguang, managing director of GF Investments (Hong Kong) Company Limited, gave a speech titled ‘Macao Featured Financial Service and the Greater Bay Area Development’. During the event, he analysed the development of featured financial services, the challenges and opportunities for Macao, and its positioning in the GBA. 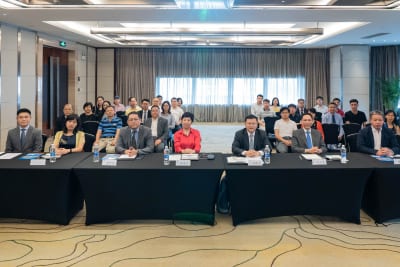 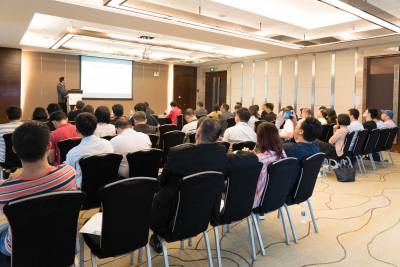